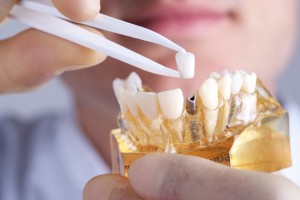 Your dental health may be one of the factors that affect the success of an implant. Here are the signs of a failed implant and how to avoid being a victim.

Dental implants are usually predicted as being successful in more than half of the cases handled.  However, they may not always work due to some factors. Although it is unusual it is better to be on the know to be able to identify the signs which mean an unsuccessful implant.

Anatomy of an Implant

Implants are usually made up of three parts, an implant is often made of titanium which is inserted in the jawbone, an abutment which is attached to the implant and a crown which resembles a normal tooth fixed on the abutment. When one or both the parts are loose or broken, it causes an issue which renders the whole implant process unsuccessful. Osseointegration is the biological process involved in the fusing of the implants which are mostly metallic to the human body tissues.  The fusing is acquired when your body produces cells which grow around the implant anchoring it to the jawbone. If the osseointegration process is affected a problem arises after the implant is inserted.

How to Recognise a Failing Implant?

When the tissues around the dental implants fail to grow as expected, it is linked to mobility. It may be too slight in the initial stages to be recognised only by a dentist.

Experiencing pain, swelling or even an infection in the gums are other signs of a failing osseointegration process. If this is noticed the dentist may take an X-Ray photo to assess the growth of your jawbone.

But if what leads to failure of an implant is known, why not avoid it? The failure of affordable dental implants depends on many factors which include personal habits and medical conditions. Gum disease can definitely affect the healing process of an implant. The anchoring of the implant screw can also be affected by diseases such as osteoporosis which affect the bone strength and density.

Some medications could also risk an implant failure. Also, medicines can affect the metabolism rate of the bones, hence limit the osseointegration process.

Smoking habits can increase the rate of having an implant failure. You may be advised by your dentist to either limit or completely stop smoking until the osseointegration is complete.

Despite all the risk factors, there is hope since a failed dental implant can be easily removed. This is achieved by the use of local anesthesia which numbs the area during the removal of the implant. One should consider visiting dentists who offer services of cheap dental implants to their patients.  If a failing implant is noticed early enough it can be removed, the area cleaned and no bone graft will actually be required.

Your dentist should have a session after the implant is fixed to inform you of the risk factors and how to prevent the failure of a dental implant. Your medical history should also be considered when fixing the implant. In the end, remember oral hygiene is a basic measure of preventing implant failure.